The Great Work - 1 - The Material Plane 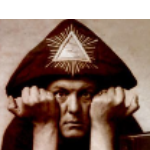 Chance Gardner is an award winning 3D animator and motion graphics designer whose work has been featured on Fox Broadcasting, 20th Century Fox, NBC/Universal, United Paramount Network and many other global media outlets. In 2000, he retired from network graphics, picked up a camera, and began making documentaries. Gardner's first title was the cult classic ""Magical Egypt"", a 9-episode series on Ancient Egyptian Magical practice. Magical Egypt is still in circulation worldwide and is used as teaching reference in hundreds of schools and colleges throughout the US and abroad. Gardner's latest release is entitled ""The Great Work"".

One year into the record-breaking success of the new age blockbuster The Secret, documentary producers Vanese McNeill and Chance Gardner began an investigation into the unprecedented surge in the mainstream popularity of metaphysical sciences.